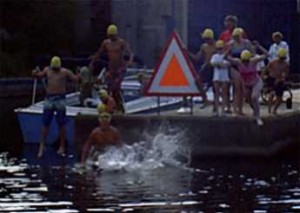 A noisy and nervous group of kids began to assemble at the cottage of Steve and Debbie Bang on the Severn River at 7:00 am. on Sunday, August 4. They were set to swim from Swift Rapids to the Bangs’ cottage dock, a distance of just over one mile (1.6 km). The children ranged in age from seven years to 15 years. Three of the boys had swum the day before in the Second Annual Swim for the Cure: Eric and Mark Bang and Michael Yetisir. The laughter was contagious as we watched all put on bright yellow bathing caps, the same as the swimmers had worn the day before. Each busied their parents looking for goggles, towels, and the encouragement that they could really do what they were about to attempt, many for the very first time.Several boats made a slow journey up to the starting point with now nearly silent children – the nervous bellies in full force – but as they assembled for group photos, proud parents watching in the wings, the shining smiles returned. These were our babies about to enter the water to swim for those with breast cancer, their Nanas, aunts, friends of the family, and others.Amidst the splash start a few remained on the dock – not quite ready, but soon on their way. It was quite a sight to see: the yellow bathing caps with arms and legs all over the place, pulling and pushing through the water with some recognizable swimming strokes and others created just for the occasion. 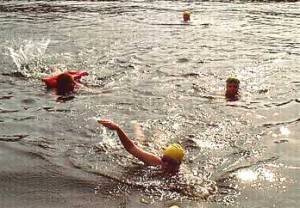 Eric Bang, 12 years old, was the first swimmer to finish, taking 30 minutes accompanied by his dad Steve in the kayak and followed by boat by his Nana and Papa, Mary Lyn and Herb Myles. Alex Nelles, 14, just back from summer camp, was second in at 35 minutes, accompanied by his dad Bob. Not far behind were Mark Bang, 14, and Brandon Haase, 15, who were paced by Debbie Bang and followed by the watchful eyes of Brandon’s parents, Michelle and Brad, and grandparents Helmet and Mary Haase.Debbie Bang got the best deal of the morning as she got to swim with all the swimmers, accompanying Michael Yetisir, 11, for his 47-minute swim, and Adam Popplow, 13, on his last leg of his 48-minute swim. Not far behind and swimming her very first distance swim with her mom Arlene and Joan Cooke in the canoe beside was Katelynn Graham, 13, who finished in 56 minutes. Seven-year-old Sezen Yetisir completed half the swim beside her mom Liz and was proud of her first distance swim.Debbie then got to swim with LeeAnn Verbeek who raised $804 for this First Annual Kids’ Swim for the Cure. LeeAnn was accompanied by Cheri Brown and Jennie Popplow who carried a back-up lifejacket – but LeeAnn didn’t need it!

Our last swimmer in was nine-year-old Nathalie King who swam a full kilometer and chatted with her parents Debbie (in the water) and Andy in the canoe for almost the entire swim. Nathalie completed her swim in 77 minutes.

It was a tearful and very proud moment for the parents and grandparents as we watched our children encourage and cheer each other to the finish – our kids gave their all and reminded us of the altruistic and loving nature of the young. In combination with the (mainly adult) Swim for the Cure which took place the day before, we raised almost $10,000 for breast cancer prevention, rehabilitation and cure. We will be proud to swim beside them this year in the Second Annual Kids’ Swim for the Cure!