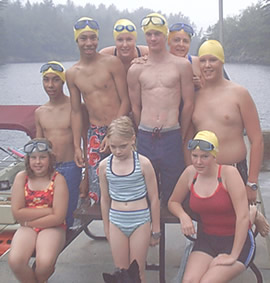 The skies opened up in a downpour just as we were about to head up to Swift Rapids Lock to begin the Second Annual Children’s Swim for the Cure.It had been drizzling off and on since 6 a.m., but the children were still keen and one of them,Kelly Leonard, had already headed up to the lock with her parents Chris and Rob in their canoe. This year there were seven swimmers ranging in age from 10 to 16 years. Both Mark and Eric Bang had swum the day before in the Third Annual Swim for the Cure, Mark completing four kilometres and Eric completing the full 12.8 km distance. We had not been sure Eric would swim again this morning, but when the moms and dads, brothers and grandparents put on their rain gear and began the processional from the Bang cottage dock to Swift Rapids, 1.6 km away, Eric was in the boat.It was a much more subdued group this year that gathered for our annual photograph around the picnic table under gloomy skies, smiling but shivering as the rain started again — and it was cool! Instead of last year’s mass plunge, the yellow bathing capsentered the river one at a time this year. Jennie Popplowand I, swimming as pacers, kept our thoughts to ourselves about how cold the water was, so the swimmers would hurry in. Once they were in, though, the kids were less shy about acknowledging the temperature of the water! 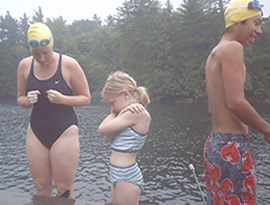 Cold water or not, they swam. Eric Bang, 13, was the first to arrive back at the dock again this year, watched by his brother Josh in the kayak, and amazing all of us after his ordeal the day before. Nana Mary Lyn and Papa Herb Myles, and Jema our family dog, trailed along in the boat, beaming with pride and taking pictures. Alex Nelles, 16, was second to finish again this year accompanied by his dad Bob; and seconds behind was Mark Bang, 15, with me in the water beside him. 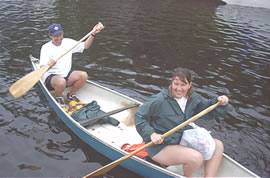 Adam Popplow, 14, confidently swimming breast stroke alongside his mom Laura and dad Don, had about 1/8 kilometre to go as I was heading back out to swim in with the other children, and was the fourth swimmer in. Not far behind him was Kelly Leonard, 11, swimming for the first time with her mom Chris, dad Rob and family dog Bailey in the canoe beside her. Kelly had a great swim, completing her last half kilometre doing front crawl beside me; our youngest swimmer to complete the swim. 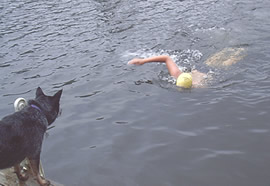 Nathalie King, 10, a returning participant from last year, had second thoughts “big time” about getting into the water when she heard the other swimmers complaining about the temperature; but in she went. Nathalie achieved her Aquaquest level 6 swimming award this year and had done a little training alongside mom Debbie King, but the wind, cold water and rain proved to be too much for her. She emerged from the river near the kilometre mark, determined to train harder for next year. 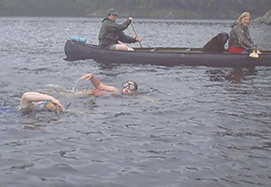 Our last swimmer in — and the greatest fundraiser for the children’s swim again this year — wasLeeAnn Verbeek, 14. Accompanied in the water by Jennie Popplow for the full distance, with me alongside for the last half kilometer, LeeAnn was filmed by MCTV’s Sean MacInnes as she finished her swim. She, Eric and I were interviewed about the swim, and our story of the event was on the 6 p.m. news on Sunday, July 27, 2003. Sean was amazing to work with, helping us to get over our nervousness about the camera, and capturing the story so eloquently. Sean then delivered the video to my parents before ending his day. Our hats are off to him with a huge thank you… our special day has been recorded forever.

Steve, Anne and Joanne had very welcome hot chocolate and a pancake breakfast with all the “fixings” waiting for the children and crew at the end. It was a great way to celebrate and to get warm again!

All in all it was a miserable morning to swim, and our children really showed us the meaning of courage. They each were shivering before getting into the water, but went in anyway and swam with their hearts, gallantly, creatively; with determined faces and smiles on for most of the distance. They were cold when they emerged from the water to welcoming cheers, pictures and warm towels, flushed from their exertion. When you ask them why they swim, they tell you they swim for the special people in their lives who have been affected by breast cancer, some of whom they met when they were “wee”; they swim for the people who have breast cancer now; and they swim “because they can!” They are an amazing group of children that Jennie and I had the great privilege to swim beside. See all of you next year!!